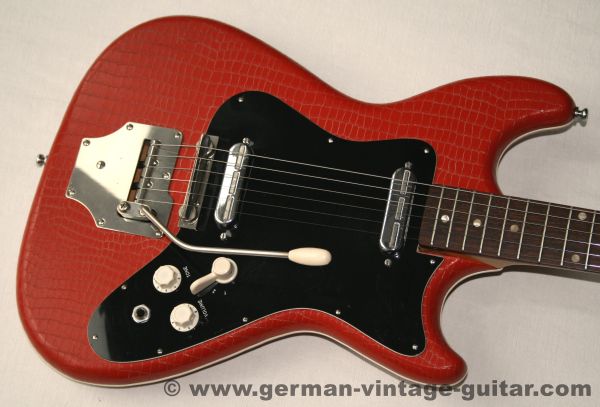 Instrument:
In the early sixties, Walter Höfner and Jakob Winter, owner of the same-named case manufacturer, were sitting together at a trade show and Höfner was complaining about the effort required to create good and insensitive finishes for his guitars. Especially for the heavily used solid bodies. That's when Jakob Winter came up with the idea of simply covering them with vinyl material, just as he had been doing for his instrument cases for a long time. Höfner was enthusiastic, and so for a short time the electric guitars and basses with vinyl covering, which are sought after in collector circles today, were created. Höfner was the first in 1962, and brands like Isana, Klira and Fasan quickly followed the fashion. The last vinyl bodies were made by Klira in 1965, and then the short-lived trend was already history. Winter supplied all German manufacturers, no one else mastered the technique of the special vacuum process at that time. Our Klira is the Ohio model, it dates from 1965 and was one of the last vinyl guitars. Presumably it was sold as "Triumphator Electric" via Quelle mail order, light scratch marks on the pickguard at the lower body horn, the place where the Triumphator logo normally sits, suggest that this was somewhat improperly removed later. But that doesn't matter, because the Quelle guitars were absolutely identical in construction to the models sold as Klira, except for the logo. The Ohio also competed against the overpowering Stratocaster at the time, but was without a chance in terms of buyer favor.

Material:
The body is made of the light and gratefully workable abachi, the neck of the proven, indestructible, but complex to manufacture beech multi-ply wood. It is made of one piece including the headstock and has a truss rod. The rosewood fingerboard has pearloid dot inlays in eight frets. Open tuners with beautiful tulip shaped pearloid grips.

Electrics:
The basis are two Schaller single coils, switchable via a three-way rotary switch, as well as a master tone control and a master volume control. The jack socket is current standard. This is simple and intuitive and completely sufficient for a wide range of settings.

Instruments history:
We do not know much about the history of the guitar. We took it over as part of a small bundle of basses/guitars. It hung together with two other vinyl instruments we took (a Klira and a Fasan bass) and various old junk instruments (violins, trumpets, dulcimers, etc.) for at least 25 years as a wall decoration above the stage in a small event hall in a village in the Wetterau in central Hesse. The owner and seller of the hall told us that his father, who furnished the hall, had bought everything cheaply for decorative purposes at flea markets and from acquaintances or had received it as a gift. The hall is now abandoned or converted as storage. The guitar was completely dusty and greasy, the electrics partially removed and non-functional, the bridge screwed on upside down, truss rod cover, strap buttons and strings missing. Screws and tuner bushings were rusty. On the headstock some barbarian had nailed a Gibson lettering made of metal letters (ouch!), probably from an amplifier. No question that we immediately took pity and had to save this great guitar!

Restoration work:
We only had to clean the body, as the red vinyl with snakeskin embossing is almost perfectly preserved. In general, the cleaning was quite laborious and time-consuming but it has once again proven that greasy pub grime (or in this case, event hall party grime) preserves well. The fingerboard and fretsticks were stripped and oiled or polished. We removed the ugly Gibson letters, filled and retouched the nail holes, and then repainted the entire neck clear and installed a matching Klira truss rod cover. All the hardware was disassembled, cleaned, polished, the tuners oiled, and the rusty tuner bushings replaced with new-old-stock parts. On the electrics, we replaced the missing controls and installed matching knobs from our Kirschnek stock from the early sixties. The black pickguard was straightened and polished. We replaced all screws with matching slotted originals. Two old, never used metal strap buttons were mounted. Finally, the Klira received a new set of 10" gauge Pyramid pure nickel strings and a complete setup.

Current condition:
A lot of effort, but it was worth it. Our Ohio is a collector's item in a cheeky, bright red Sixties look, the vinyl in snakeskin embossing a real eye-catcher. Everything is again sparkling clean and completely odor free. Amazingly, the guitar has virtually no signs of play except for a few micro scratches on the pickguard. Neck and frets are as new. Everything is flawlessly intact and works as it should. The vinyl surface is actually very durable and insensitive. The hardware shines like new. The modern, slim neck contour and low string action make for perfect and foolproof playing feel. Of course, the Klira also sounds like it looks: Pure Sixties beat! But beyond that, it delivers warm, Shadows sounds with endless reverb just as well as the hard rock style. An uncomplicated and very versatile fun guitar! This beautiful collectible is a show instrument, which makes a good figure on any stage, but also an uncomplicated and insensitive player for every day.