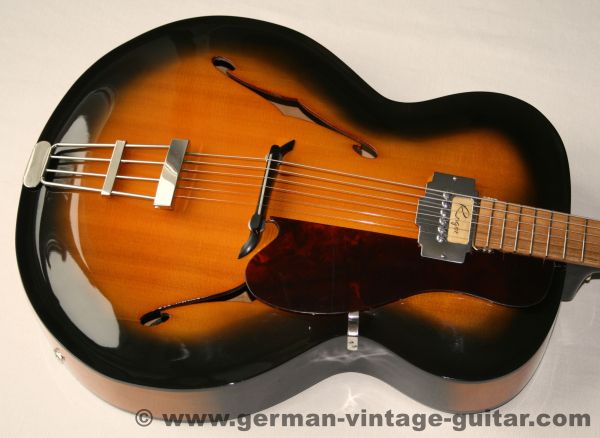 Instrument:
At the time the most expensive jazz guitars you could buy, today rare treasures with unrivaled sound: The early Roger Junior from the Rossmeisls' Berlin era with original pickup still sets standards. A heavy and massive piece of German guitar history. Shown here in the common brown shaded finish. The serial number 860 means that it was built in January 1952 by Wenzel Rossmeisl's son and master luthier Roger Rossmeisl, shortly before his emigration to the USA.

Material:
The massive, 7 mm thick top is made of extremely fine-grained and highest-quality spruce wood, shaped in the legendary German Carve design. This development was patented by the Rossmeisls: A strong cove runs around the straight top. Back and sides are made of massive maple, the back completely straight like all Berlin Roger guitars. At that time, there simply wasn't enough good material to make the backs in German-Carve construction as well. The neck, including the headstock and the neck foot, is made end-to-end, consisting of three pieces of maple glued together lengthwise. The newly made fingerboard is American walnut, it carries the old creamy white celluloid inlays in five frets taken from the previous fingerboard. The neck has an invisible internal reinforcement made of two aluminum profiles. Contrary to the standards of the time, there is no zero fret, which was common practice with the Rossmeisls. Open Schaller single tuners. Original Roger pickup in art deco style with jack socket in the lower bout. Massive nickel-plated brass tailpiece by ABM Müller. Ebony bridge and pickguard made of genuine tortoise shell. Original Roger plastic logo from the sixties.

Instruments history:
Largely unknown. But the guitar was completely ready for the junk after an eventful life. The oak fingerboard was full of deep grooves, the frets were worn down to the wood. There was a large, sawed-out hole in the top where an improper pickup had probably been inserted at some point. All of the original hardware was missing or had been replaced with mismatched new parts. The entire paint surfaces were extremely scratched and cracked, the paint already flaking off extensively. An improper, cheap plastic nut had been installed and filed way too deep. All in all, the guitar was an unplayable wreck.

Restoration work:
The body and neck were separated. The lacquer surfaces of the body were completely sanded down, and the sawed-out pickup hole was closed cleanly and perfectly flush with a piece of spruce. The top now vibrates perfectly again. The varnish was then painstakingly rebuilt, the old color scheme was varnished on, and the surface was finally finished with shellac and polished. The neck was also completely sanded down and the destroyed fingerboard removed. Two aluminum profiles are now invisibly integrated for reinforcement. A new fingerboard made of American walnut was made, the oak fingerboards frequently used by the Rossmeisls at the time served as a color template. Since the original fingerboard inlays made of creamy white celluloid still had enough material, they were reused, glued into the new fingerboard and sanded flat. Of course the fretboard also got new fretsticks. Also the neck got a new varnish according to the old pattern with shellac. Since the old Roger logo was also lost by the complete sanding, a new plastic injection molded part was glued on, as it was used on Roger guitars from 1964 on. It is an unused Roger original from old stock. After gluing the neck in place, it was on to final assembly. A bone nut was made and glued on. The original Roger pickup dates back to the fifties, it is connected directly to a jack socket (current standard) in the lower bout without a control, just like back then. From our old Kirschnek stock comes the heavy, massive ABM-Müller tailpiece, the ebony bridge and the old Schaller tuners with cream-white marbled pearloid grips. Something special is the pickguard: we still had two panels of original tortoiseshell from the forties in stock! (The production is forbidden today because of the easy flammability.) For this guitar we made a pickguard from one of these panels according to the original pattern and adapted it to the pickup cutout. The bracket is also an original part of a Roger. Finally, we mounted new 11 gauge roundwound strings and did a full setup. Overall, the rebuild of the guitar follows the old original condition as far as it was possible.

Current condition:
The only superlative that still fits here is indeed "better than new"! The 1952 finish was never as perfect as the current shellac one, and the old oak part doesn't come close to the quality of the fingerboard. Even though none of the hardware is original, they all match the original condition and are contemporary. The refurbished tuners work perfectly and shine like new. The bridge and tailpiece are new old stock. The tortoise shell pickguard has some scratches from about eighty years of plate storage, but otherwise shines like new and is a rarity in itself. The art deco style pickup is a Roger original from the fifties. At seventy years old, the Junior seems to have fallen out of a time machine and only generates looks of disbelief. It has a wonderfully full sound with lots of volume - you can hear the massive wood here! The thick top requires not too thin strings and a courageous attack for full sound development, like all Roger guitars. The pickup works flawlessly and delivers a uniquely soft, warm, woody sound. Playability is as good as new with the revised neck - at just under 2mm at the 12th fret, the setup almost matches electric guitar dimensions. There are no more damages, blemishes, quirks or similar, the guitar is 100% odorless and clean! Is this a highlight for the climate controlled display case? A 70 year old exclusive player? Valuable investment? All together? We leave that to the new owner to evaluate. Fact is, that a Roger in this condition is not available elsewhere. Its condition corresponds to the top restorations of a Herbert Rittinger, but his guitars are not for sale and therefore unattainable.