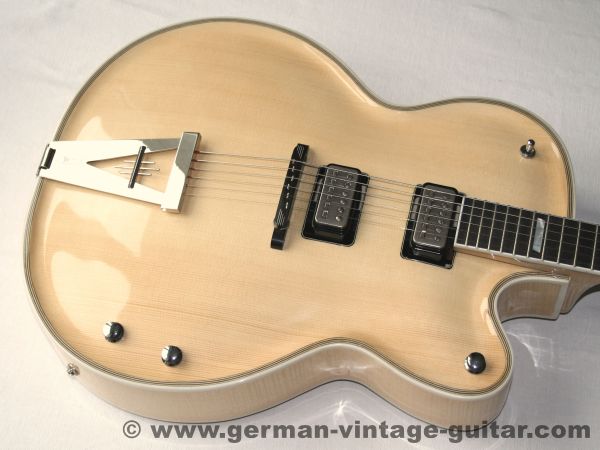 Instrument:
In 1964, a German musician, who's name hasn’t been handed down, saw a Guild, customized for the Chicago swing and jazz musician Gerge Barnes – the Acousti-Lectric (watch attached pic). As one of the only eleven ever made examples would have been way to expensive and unreachable, he brought his matter and some pictures to Artur Lang, who took over enthusiastically. As expected, he didn’t build simple replicas, but a typical Lang interpretation of the basic idea. He made exactly two identical guitars. They don’t have an official model name but are well known as the “Lang special model without soundholes”. Main feature is, that pickups haven’t been mounted at the top, but on a wooden bar inside the body and second, the relocation of the soundholes: There are only small openings around the pickups. Gerge Barnes needed the bar solution, because his tuning was four notes higher than standard, something, no archtop top can stand on the long run. The guitar we offer, complies exactly with the Lang original (watch attached late picture, then already with wrong tailpiece), up to the smallest screw and with millimeter-level accuracy.

Instruments history:
Worlds leading Lang expert, German Herbert Rittinger, had to face one blemish, when watching his impressive Lang collection: The Special Model was missing. One of the two originals has been offered for sale some years ago, but realizing the price of much more than 10.000 €, Rittinger didn’t come to a buying decision. But he was allowed to take all measures and many pictures. Like this he was able to start a project, he planned for many years: Building a replica of the legendary guitar. Decision towards a master luthier was easy: Anton Sandner, 79 years old, last remaining archtop builder of the legendary german post war period and living legend, was the choosen one. Directed and meticulously controlled by Herbert Rittinger, four guitars have been made. He kept two of them, another one went to a friend. We are honoured and proud to be able to offer the fourth one!

Material:
Of course, only the finest material has been choosen – Rittinger always means high end, nothing else. Massive top of German Alps spruce, massive sides and back of beautifully flamed maple, seven-layer neck of flamed maple with a pear center and two mahogany stripes. Inside the neck there’s the typical Lang steel bar, like this it’s 100% stable and solid. Ready even for strong 14” strings, although they’re not necessary for great sound. Fingerboard is made of ebony, inlays of real mother of pearl, nut of bone, Teller-Höfner bridge of ebony too. Nitro lacquer. The body bar is made of mahogany, with a matte black finish. Like this, the top is completely exonerated and can show a perfect vibration behavior. Inside the body there are the often-proved parallel Lang bracings, made of spruce. Body, soundholes and neck show nice large bindings, providing thirteen layers around the top. Hardware is perfectly matching: Two original Höfner staples pickups, model 517 from the sixties – in perfect condition. Orignal old Schaller controls, open original Kolb tuners. Nickel-plated tailpiece is an exact replica of an original one. Very special feature is the headstock face metal plate: Herbert Rittinger convinced the very old engraver, who already engraved the original Lang plates in the sixties, to produce another final four ones for the small edition!

Electric system:
Back then and today it’s an often-proved standard equipment: Two Höfner 519 staples pickups, master volume, one sound control for each pickup and a three-way toggle switch for pickup choice. Reliable and perfect for countless sound options. A standard jack socket is mounted at the lower bout.

Actual condition:
Actually it’s superfluous to talk about quality when talking about Rittinger: Just perfect, not less, not more. Same as Artur Lang back then, who never focussed on profit but always on sound, Rittinger only concentrates on perfect tone. As Lang did, the wonderful wood only got a very thin finish of nitro lacquer. The impressive 17,5” archtop shows a wonderful straight, clear and noble look, of course nothing else but typical Lang. Even unplugged the sound is overwhelming: The unusual soundholes don’t limit anything! Rittinger took measures and compared with the best other Langs, he has in his collection. He proves, the Special Model isn’t weaker at all. Like all Lang guitars very loud, assertive, with massive middles, each single note clearly accentuated within the chords, optimized for being used by huge big bands and orchestras. One of a kind characteristics, not comparable at all. But of course, eye to eye with the world’s best archtops: D’Aquisto, D’Angelico, Benedetto, Scharpach Vienna… Compared to those, our Lang seems to be a bargain, but cleary an instrument like this has it’s price. Once in a lifetime opportunity for collectors, players and safe investment with growth potential too.