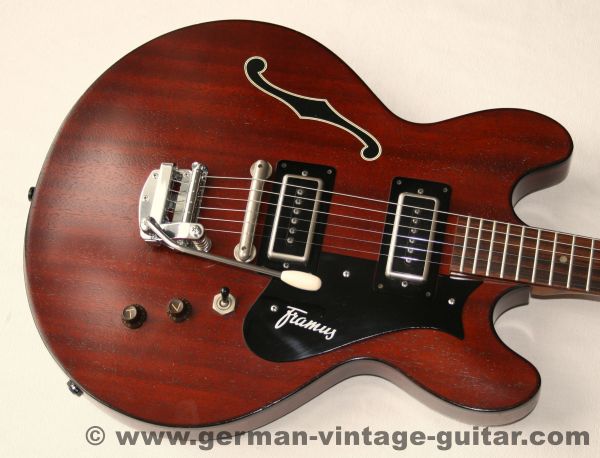 Instrument:
The Sorento 6 model offered here is one of the few examples with a fine mahogany veneer. Stamped 70 K means built in November 1970. Whether New Sound, Fret Jet, Caravelle, Sorento or Atlantic - all these models competed against the legendary Gibson ES at that time. More or less independently and with more or less success. But there are quite a number of musicians who prefer a Framus to a Gibson. It is still inferior in terms of image, but in terms of quality and sound it is at least equal, as we can confirm from direct comparisons. An important argument for many musicians is, of course, the cost: a Sorento 6 in this condition is no longer cheap, but it is still many times cheaper than a 70s Gibson ES that easily costs three times as much.

Material:
The body is completely made of alder, covered with mahogany veneer and matt open-pore lacquered. The fake sound hole is only glued on, the guitar has no open resonance chambers, but is not solid for weight reasons. Everything is made of laminated wood for the sake of stability and to avoid feedback. For stabilisation, there is a central and sustain block made of mahogany inside. The tried and tested multi layer neck is also made of laminated beech wood strips and is made from one piece, including the headstock. All in all, the guitar is almost indestructible and stable to this day. In addition, a beautifully grained rosewood fingerboard and solid, nickel-plated hardware. Open Framus tuners. Tailpiece with extremely tuning stable tremolo unit.

Electric system:
The equipment is well-proven standard. The pickups are two classic Framus P90 single coils. They are not controlled by contemporary seventies circuit experiments, but by a volume and a tone control, plus a three-way toggle switch for the use of the pickups. That's all you need for versatile sounds.

Instruments history:
Our Sorento 6 has passed through several hands, but was always treated with care and never really challenged. It is likely to be a hobby guitar without stage use or rehearsal room experience and has spent its life in various living rooms. However, it was apparently never cleaned either, because it was staring at sticky dirt, most of the screws, the whammy bar and the tuners and bushings were rusted, the numbers of the controls were no longer visible under their thick layer of dirt.

Current condition:
Framus ES descendants are not that rare, but you have to look for this colour and this good condition for a long time and have to be lucky to get one. Beautiful overall appearance and authentic vintage look with practically no signs of wear. Only on the headstock there are a few small quirks, otherwise no paint cracks, very few scratches, dents or major flaws. A great, independent sound and the modern playability characterise this Framus. We have here a real rock guitar - Alvin Lee would have had his fun! Everything is in original condition as it was in 1970: fingerboard and frets are as good as new, the pickups are bang on, the electrics are faultless, all controls move smoothly - there is nothing to optimise here. An exceptional condition for a 51 year old instrument! First choice for players and collectors - why spend so much more for a Gibson?