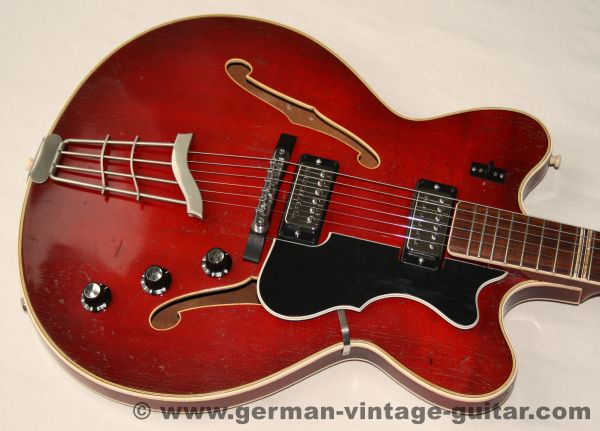 Description
Description
Instrument: Except for the label, the 4574 is identical in construction to the famous guitar... more
Close menu
Product information Höfner 4574 „Verythin“, 1966

Instrument:
Except for the label, the 4574 is identical in construction to the famous guitar called "Verythin" in Great Britain. The decisive factor here is the only 3 cm thick body. Despite the British headstock, our model is probably the German version, because it lacks the Selmer soundhole label and, in addition, the British Verythins were changed to exclusively Florentine cutaways (with sharp ends) as early as 1965. In Germany, the model was a perennial from the upper end of the range and was built from 1960 to 1976. There were only two colors available until the mid/late sixties: Brown Sunburst and Cherry Red, like our guitar. Verythin and 4574 are today among the most famous, sought-after and now legendary Höfner models. The Chinese made low price range Contemporary models, which are currently offered by Höfner, are not even close to being comparable.

Material:
4574 and Verythin are always laminated. The top is made of spruce, sides and back of flamed maple. Here transparently lacquered in cherry red. Elaborate bindings of up to six layers around the body, sound holes, neck and headstock. The neck is made of three longitudinally glued maple pieces, including the headstock. It has a truss rod and rosewood fingerboard with beautiful seven-ply white and brown cross-striped pearloid rectangular inlays in six frets. The headstock with ebony overlay is decorated with the familiar, uniquely beautiful bellflower motif and the British-style Höfner lettering, all intricately inlaid in pearloid. Black stained rosewood bridge with metal top, fully compensated. Open Schaller single tuners with celluloid grips, massive Lyra tailpiece and a four ply pickguard.

Electrics:
At the heart of it are the two hundredfold proven Type 511 "Staples" pickups, here brand new and in perfect quality. Identical in construction to Höfner's double coil humbuckers, which were used in countless guitars from 1963 to 1967. These pickups are among the best that Höfner has come up with. Controlled with a three-way toggle switch for pickup selection, a master volume knob, and a tone knob for each pickup. That's all it takes for versatile sounds and simple, intuitive operation.

Instruments history:
This guitar has had a very turbulent life! It was bought new in 1965 in a Hamburg music store and then used for about 15 years mainly in northern Germany as the main guitar of the semi-professional musician on countless small stages, dragged through rehearsal rooms, lent to musician friends and really played endlessly. In the meantime, it had to undergo various rebuilds and optimizations, so the pickups were changed, the pickguard removed, the Schaller tuners replaced, etc. etc.. In the end, it was retired, but not before all usable hardware was removed. So it was cannibalized and hung in a cellar bar as a wall decoration for about 10 years. Around 1990, the guitarist's wife was expecting a late baby. A friend offered his well-preserved crib in exchange for the guitar and took over the Höfner. In the following years, with little money and expertise, he tried to make it playable again, but with only moderate success. So it stood around as a permanent project for almost 30 years until it was offered to us for sale in 2021. Since the history and the spirit of the guitar immediately inspired us, we gladly took it over and have now restored it extensively. So it should now be fully operational again for the first time in about 40 years.

Restoration work:
The guitar, which was heavily soiled with nicotine, was first completely cleaned and the body thoroughly blown out. All lacquer surfaces were extensively retouched and polished. The fingerboard and frets - both amazingly well preserved - were sanded, the fingerboard oiled, and the frets polished. We had to completely rebuild the electrics with two new Höfner Staples pickups, modern controls (which you can't see), original Höfner new-old-stock knobs and a new jack socket. Only the pickup selector switch was still there from the electrics... A matching old lyra tailpiece from ABM-Müller, an original 4574 pickguard, original Höfner tuners from the sixties and a compensating bridge came from our stocks. The strap buttons are still original. Since some 4574 and Verythin were supplied without pickguards, we did without them here as well. Finally we mounted new 10 gauge Pyramid nickel strings and did a basic setup.

Current condition:
This beautiful high-end Höfner is bursting with time spirit and uniquely beautiful playing wear. Such guitars are the prototypes for modern, elaborately artificially aged guitars, but real patina simply cannot be copied! The body has countless tiny scratches and dents, especially on the top, beautifully crackled micro lacquer cracks, but the guitar shines wonderfully again after polishing all around. It is an absolute eye-catcher, beautifully designed it offers wonderful sixties zeitgeist, but is still up to date. It is very easy to play and the fretboard and frets are in mint condition. With its 2.2 kg it is a lightweight, which allows even long stage stays back-friendly. The sound is fantastic! Already unamplified completely sufficient for practicing at home. If you plug it into an amplifier, the modern technology shows its strength - the sound is overwhelming! Crisp, full sounding, very modern, fast response, long sustain, fat and full-bearing tones up to the highest registers. At the same time it is really versatile - from rock to jazz, from loud to soft, from plectrum to fingerstyle really everything goes. We claim that a comparable 66 Gibson ES in this quality would cost at least ten times as much! The condition is excellent, of course there are no damages, cracks or breaks, everything works perfectly. Our 4574 is not a flawless collector's item, but a unique rock guitar that belongs in a band and on stage. Rock history and at the same time a wonderful workhorse to have fun every day!