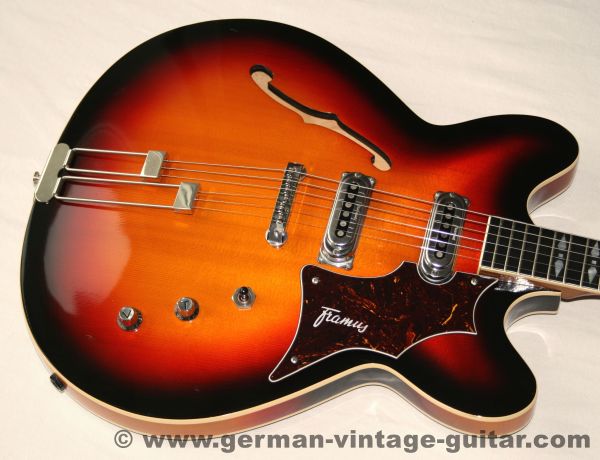 Description
Description
Instrument: The basis of this unique double cutaway is the body and neck of the Framus... more
Close menu
Product information Framus SL-1000 “Special”, one of a kind, 1975

Instrument:
The basis of this unique double cutaway is the body and neck of the Framus SL-1000, completed with standard Framus parts from the end of the sixties. It is a thinline with a central block and only one upper soundhole. This is because there was no room for a second soundhole at the bottom due to the actual electrical equipment of the SL-1000.

Material:
The large 17" body has a thick, heavy and laminated top of fine-grained spruce and sides and back of maple, the back beautifully flamed. The neck, made of the indestructible multi layer beech wood, has an ebony fingerboard with genuine bow-tie style mother-of-pearl inlays and side trim next to the neck binding. Solid nickel-plated hardware, stair-step tailpiece, fully compensated roller bridge, pearloid pickguard and new Framus vintage tuners. Perfectly executed three-tone sunburst finish.

Instruments history:
In the bankruptcy confusion of the seventies, the freelance Framus home workers were in some cases no longer paid their full fees, or not paid at all. Some of them held themselves harmless by not returning guitar parts later and trying to sell them individually or as finished instruments. Since Framus was no longer up to date in those days, and since there were many such parts in circulation, it was often impossible to sell these individual pieces for a reasonable price. This was also the case with our guitar: A luthier, whose name we will not mention here, kept this SL-1000 body and neck. He later built a wonderful Thinline with original Framus parts from the late sixties. However, he could not or would not sell it and so it remained unplayed in his workshop until his death in the 1980s. When the workshop had to be evacuated at very short notice, the heirs had no other choice and threw practically the entire workshop equipment into a dumpster provided for that purpose. There, in turn, another guitar maker from Bubenreuth saw them and picked up most of the contents of the container for a symbolic price of 100 DM and took them to his workshop. In the months that followed, he sold most of the stuff individually, piece by piece. He also dismantled the guitar's tuners, presumably to use them elsewhere or to sell them. We don't know which ones were mounted there. And so the guitar ended up with a German collector around 1990, where it remained unplayed for another 30 years until we were finally able to acquire it in 2020. He also told us the whole story and knows the names of the protagonists. Until today, the Framus has never been used in any significant way.

Restoration work:
We cleaned and polished the guitar, blew out the body, polished the frets and oiled the fingerboard. We replaced the compensated wooden bridge with an original new old stock model from the seventies and fitted new Framus vintage tuners. New strings were put on, a basic setup was done and now since many decades the guitar is ready to rock again.

Current condition:
The guitar is in virtually new condition. A 17" thinline monster in perfect condition, eager to finally be used. The few tiny scratches are probably not so much from playing as from the adventurous container, transport and storage escapades. There are no wood or varnish cracks, no signs of playing, no fading and of course no other damage. The Framus is practically flawless. A worldwide unique collector's item and only available here. The SL-1000 was one of the best and most expensive guitars Framus built in the seventies, and the quality of the body and neck is correspondingly high. The whole thing combined with proven and high-quality parts results in a really fantastic guitar. It is very easy to play, the modern contoured neck and the low string action make it possible. The sound is of course limited when unamplified due to the thick top and the one sound hole, but when amplified, it blows your mind! Almost without feedback, it delivers powerful sound from strong pickups and easily keeps up with any modern electric guitar.