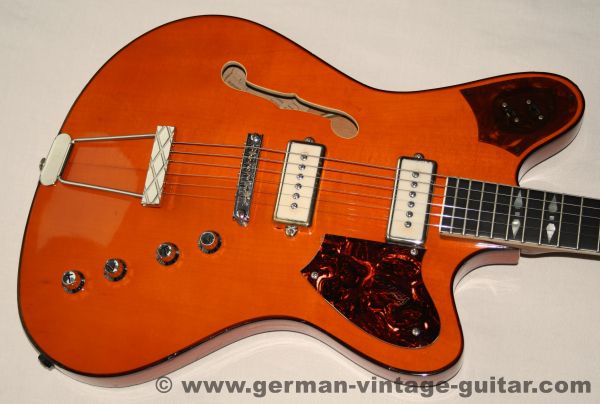 Instrument:
The Atlantik/Television shape is perhaps the most beautiful independent design Framus has built. In keeping with the spirit of the times, it is a thinline without a center block and with a real soundhole. Our guitar has the expensive neck of the BL15 (or SL-1000). It is stamped 67 I and therefore dates from September 1967. In front of the handwritten model name there is also an AM - these are the initials of the first owner.

Material:
The body is built entirely of maple and painted bright orange in the finest flower power look. The neck is made of the thousand times proven and indestructible maple laminated wood and carries an ebony fingerboard with eight genuine mother of pearl inlays in bow-tie style. Of course, it has a truss rod. The closed single tuners are new from Framus. The solid bridge has fully compensating roller string pegs. The solid tailpiece is also designed for 12 strings as standard, this is how Framus "optimized" their production at the time.

Electric system:
The equipment is fundamentally reliable and tried and tested Framus standard. The two legendary P90 pickups each have an on/off switch, volume and tone control. This is very easy to understand and intuitive access to versatile sounds.

Instruments history:
The first owner and buyer, Alfred M., lived at that time in Forchheim, only 10 km away from the Framus factory. He took advantage of the neighborhood and ordered "his" Atlantik from the factory in the summer of 1967. Since he didn't like the "new-fashioned" headstocks in the Stratocaster style with six tuners on one side, he had the Atlantik equipped with the high-end neck of the BL15. Framus often did custom work like that back then. He then played the guitar himself until the 1990s, also in several amateur bands, before passing it on to his son. This one removed the pickguard and replaced the original tuners with new Kluson US models with Tulip grip, as often found on Gibson guitars. However, the guitar was only played at home from time to time. At some point it fell over, breaking the original nut, making the guitar unplayable, and was subsequently put away to be repaired "sometime soon". This became almost 20 years. Since in the meantime no one in the household plays guitar, we were offered the beautiful piece and said yes immediately.

Current condition:
The Atlantik offered here is a real eye-catcher! The beautiful orange color shines brilliantly fresh and unfaded and exudes sixties surf mood, the exquisite neck gives the guitar a very special touch. The patina is very subtle, only a few tiny dents on the edges do not bother at all. All in all there are only a few playing marks for 54 years of guitar life. Fretboard and fretsticks are tiptop and good for many more years of use. Everything works flawlessly. The string action is low as new, and the neck is smooth to play. The new tuners work perfectly. A show instrument and gem for the stage! But also a beautiful collector's item with complete history.