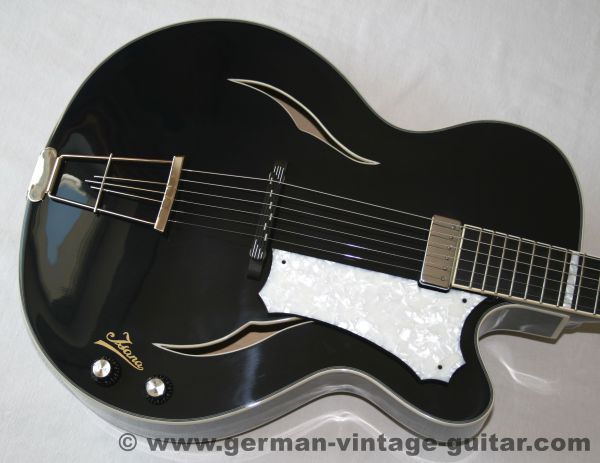 Description
Description
Instrument: This instrument is something very special and a rarity in the history of the Black... more
Close menu
Product information Isana „Black Pearl“ 2017, No. 6, prototype

Instrument:
This instrument is something very special and a rarity in the history of the Black Pearl reissue project. After testing also other production houses, we came to an agreement with Joe Marinic (Shadow) and his production consultant, Gibson master luthier legend Ren Ferguson. The guitar offered here, is the first result of Joe and Ren's efforts and the first pre-series Shadow prototype we received in 2017. We were so satisfied with this guitar, that with the No. 8 and only a few changes the series could start. The model offered here carries the serial number 6 and is the only Black Pearl worldwide to have two controls on the top as original equipment. Also some other details were changed for the series, e.g. the shape of the sound holes, the neck block and the pickguard. The new edition of the Black Pearl itself is visually largely identical to the legendary fifties guitar. The details, however, have been brought up to modern quality standards, e.g. the neck profile, truss rod, individual tuners and pickup system. But just like 60 years ago, it is a real Sandner from the South Hessian company in Nauheim, which also released the Black Pearl at that time. A test report (in German language) of the later serial guitar in issue 4/2019 of Gitarre & Bass can be found here!

History:
The Black Pearl, which was built about 200 times in black 60 years ago, is not just one of many post-war archtops, but the most famous Isana ever. After all, none other than Elvis Presley played such a model during his army time in Germany. The few originals are in the hands of collectors and - if at all - only available at four-figure top prices. Once one of the German showpiece companies in instrument making, Sandner ceased guitar production in the seventies, but the legend lives on until today. On the occasion of the 90th anniversary of the company, the grandson of the founder and current head of the company decided to have the Black Pearl built in small series again - together with German Vintage Guitar. However, the aim was not to produce an exact copy of the famous original, but a high-quality jazz and rock guitar that looks like the original, as far as possible, but is technically up to date. No zeitgeisty retro playfulness, but a modern archtop with excellent sound and playing characteristics, which at the same time revives the German design competence and the "Tuxedo style" of the post-war period. The legendary Gibson master luthier Ren Ferguson advised us on the development and series production of this prototype, which he himself has worked on. This is one of the last Black Pearls that will be sold, because there will be no more series, production has been stopped.

Current condition:
This is an awesome sounding guitar with maximum playing comfort. Loud, accented, dynamic and absolutely assertive - amplified as well as unamplified. See test report! Combined with beautiful and today unique looks it is equally attractive for fans, collectors and players. The highlight of every collection and eye-catcher on stage! Sascha Vollmer from The Boss Hoss plays a Black Pearl, as does the Italian world-class jazz musician Dario Pinelli! It comes in a gray mottled vintage shaped case with thick green plush lining and external logo print. This case is also unique in the series. For collectors, this guitar has a special value because of its unique position. All brands have much less real and demonstrable pre-series prototypes than expected - but this is one of them.